Beyond COVID-19: How the manufacturing industry should prepare

To listen with patience is not always an easy task.

In our endeavor to improve worker wellbeing, in collaboration with Humanity United and Shahi Exports, we, at Good Business Lab, are developing a tool to make it easier for factories to listen to their workers. Here, we highlight the importance of giving workers a voice.

Enter a garment factory production floor and you will notice that while a majority of the front-line operators are women, most of their supervisors are men. Combine this with conservative social norms and you can recognize an imbalance. On top of this almost everyone on the factory floor works under immense production pressure. Anecdotally, we know this manifests in the form of shouting, abuse, and harassment on the factory floor and that, along with other issues related to the work environment, often goes unreported.

To address some of these questions, let’s travel back to the summer of 2016.

Workers at Shahi Exports had recently learnt that the annual minimum wage hike would be lower than expected. We randomly selected nearly 2000 workers from 12 factories to take an anonymous survey on wages, job conditions, work environment, and supervisor performance. We found that giving workers the survey reduced their probability of quitting by about 20 percent (upon comparing with workers who didn’t receive the survey).

Phenomenal what a mere survey did, right? Our exploration did not end here.

In 2018, we got in touch with a clothing brand called The Children’s Place. They wanted to pilot an existing anonymous SMS based worker grievance redressal platform, called WOVO. This covered 7,000 workers in two Shahi factories; we got on board to run a randomized controlled trial evaluation to test the business and social impacts of this tool.

As part of the research design, we randomly allocated the workers to two groups:

1) [Treatment group] The first group got a formal enrollment into WOVO via training along with encouragement (in the form of SMS reminders and training sessions) to use the service.

2) [Control Group] The second group did not get a formal enrollment into the tool via training nor any kind of encouragement. Ethically, we couldn’t preclude them from using the tool, however, they were not formally introduced to it or encouraged to use it.

In addition to the quantitative findings from our experiment, we also interacted with Human Resource managers in the two experiment factories to understand their experience of implementing and using WOVO. We found that low literacy is a barrier in using an SMS service and that workers sometimes prefer to talk face to face or call factory managers. Further, the existing responsibilities of specific floor managers need to be leveraged to troubleshoot and increase the speed of this process. We also heard that usage of WOVO increased once workers started trusting the service. In fact, the managers felt that this tool brought the workers closer to the management. They also underscored the need for an incentive system to encourage managers to effectively use any tool. 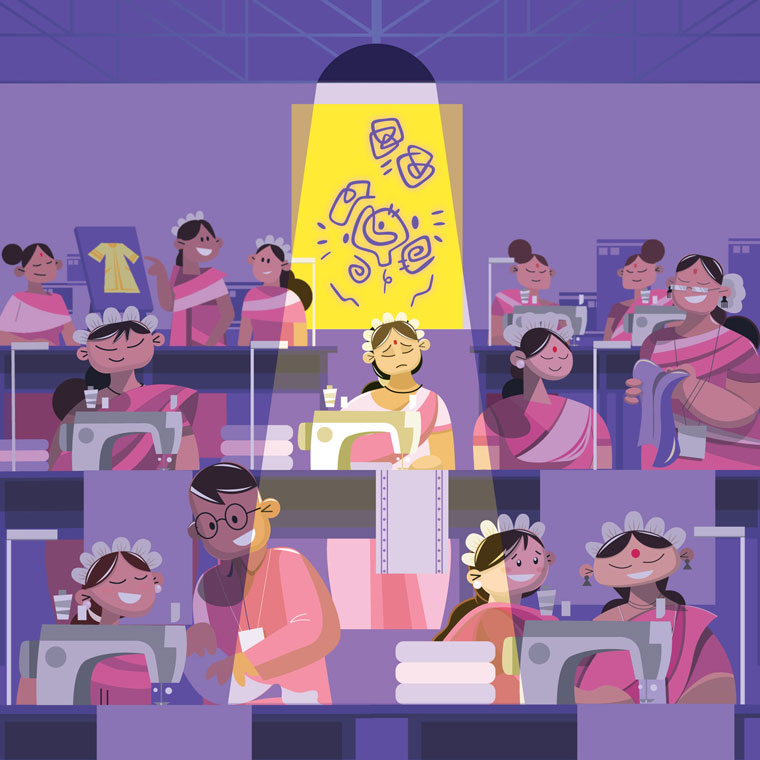 Ultimately, they all endorsed the need for such tools in all factories. However, external tools present a huge cost barrier due to high subscription fees. Thus while there is buy-in from management to implement such a tool, for companies like Shahi that run over 60 factories, having their own tool makes more business sense.

One of our big goals at GBL is to translate our research findings into real-world action. Our industry partner, Shahi, considering the need for a voice tool in their factories but also factoring in the high subscription costs of external tools, asked us to develop a worker voice tool from the ground up. Equipped with our body of knowledge, from previous experiments and interviews, we decided to understand the context better and design a product /service accordingly to generate buy-in and reduce costs.

We dived into Shahi’s organizational structure, mapping all the stakeholders a worker interacts with. We also looked at the existing traditional mechanisms a worker has access to, to report grievances or suggestions or even ask questions at work. We used qualitative research methods such as in-depth interviews to understand workers’ lives better — their typical days and how they respond to stress.

And finally, we came up with — Inache.

Inache is a low technology solution responding to a lack of an effective, transparent, and trusted medium of communication for workers. Workers can send a text or call about their grievances, suggestions, or questions, which go to a central dashboard, onwards to designated factory staff. It is a two-way communication platform for workers to speak up and managers to listen and help.

The calling facility is a key differentiator owing to comfort and low literacy among workers. Further, unlike other tools, the links for the dashboard were designed to leverage the existing responsibilities of factory staff.

This coupled with trainings for workers to instill trust and recognition based incentives for factory managers is now being tested via randomized controlled trial spanning 40 garment factories.

Hold up, what’s in the name?

Inache means squirrel in Kannada (the native language for many of the workers in the 40+ factories). When we were conducting in-depth interviews, we carried out “semiotic analysis” to understand the workers. We showed them various images and the central question was “what/how do they feel in the factory?” Many workers chose images that signify diligence and dedication. The most relatable and prominent image was that of a squirrel. The squirrel if we observe works in harmony with its environment. This is in fact how workers saw themselves in the factory setting! 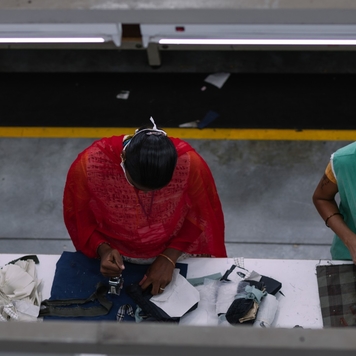